On this important occasion of the launch of the inaugural WORLD NINES – Confederation Cup in Apia, a new chapter of rugby league has begun in SAMOA. The rugby league code has been played in SAMOA for a number of years, and has become one the best economical options for our athletes in advancing their careers professionally.

The magnitude of the WORLD NINES – Confederation Cup  is the first of its kind in rugby league to be played on our home soil. While this will focus international interest on SAMOA as a sporting nation, it will also portray our capacity to host world events, and demonstrate the capabilities of our sports personnel and infrastructure that have made it possible to conduct and facilitate several international sporting events in the past.

The WORLD NINES – Confederation Cup will generate a meticulous blend of high level professional sportsmanship in rugby league. The tournament will benefit not just our athletes, as esteemed media coverage of SAMOA as the Host Country will benefit SAMOA as a whole, while opportunities to expand knowledge of local coaches and referees in the rugby league code will be acquired at no cost. These were crucial elements in government’s decision to host this tournament in Apia.

Rugby league has certainly produced the best talents in the Pacific playing nations namely Fiji, Papua New Guinea, Samoa and Tonga. Recent figures confirmed that 47 percent of Australia’s national rugby league players are of Pacific heritage. Our SAMOAN diaspora have contributed enormously to the game of rugby league in Australia, New Zealand and the United Kingdom, providing the x-factor to the game. Recent results of the international rugby league fixtures were very encouraging for Pacific nations with very limited resources, but have toppled the might of the historic powerhouses in the game. That generated more excitement to watch rugby league.

As planned, national coaches from every competing nation will be in SAMOA for the WORLD NINES – Confederation Cup. Our local coaches and referees will join each international team in a major coach refereeing and trainers’ upskilling program during this tournament, which will enhance the level of professionalism in officiating games and in coaching.

SAMOA needs professional coaches in all sports, and to coach the coaches. Our athletes have the physique and the talent to produce the best results for SAMOA. Investing in coaching, refereeing, and sports infrastructure will go a long way in nurturing and in pushing our athletes beyond their limits to excel in sports. That is why Cabinet had approved the development of an Academy of Sport in Samoa. Tournaments like the WORLD NINES will help to ignite pathways to future roles in various facets of sports that will benefit our country.

This event will attract rugby league fans and supporters from around the world to come to SAMOA. They will experience the renowned hospitality and warmth of our people, and the unique tourism features that SAMOA offers to visitors. I gathered that there will be exciting preludes to the tournament which will be beneficial for local businesses and our tourism industry.

As I have said in the beginning, this is the genesis of a new chapter for rugby league in SAMOA. I trust that this inaugural world event will showcase the best talents from around the world, and that our players, coaches and referees will benefit from the programmes that the Broughtons, Mr. Gould and others with experience, as people who have built such programs, as we take this important initiative forward.

God bless the launch of the WORLD NINES – Confederation Cup . 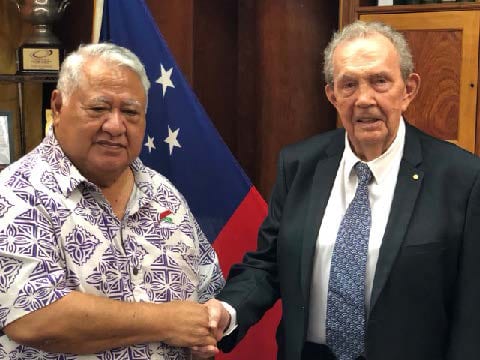 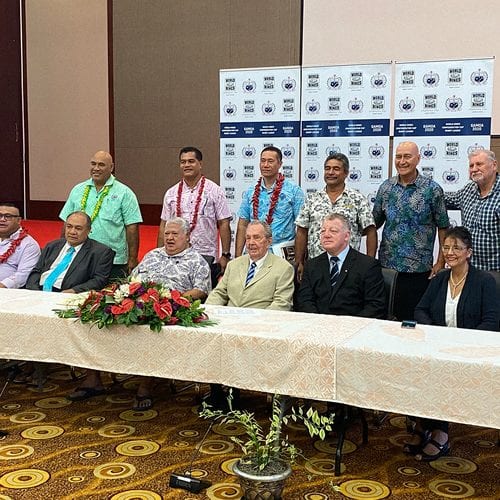