Paul Broughton ’s passion for Rugby League, and its continued international expansion has taken a giant step forward today, with the announcement of the WORLD NINES – Confederation Cup including ‘new generation nations’.

The historic four-day event, scheduled to be played at SAMOA’S Apia Park Stadium from the 21st to the 24th of October, will, for the first time in rugby league history, see powerhouse nations’ India and the People’s Republic of China, welcomed to rugby league’s world stage.

The Honourable Prime Minister delivered a stirring address, saying that “The magnitude of the WORLD NINES tournament is the first of its kind in rugby league to be played on our home soil. While this will focus international interest on Samoa as a sporting nation, it will also portray our capacity to host world events and demonstrate the capability of our sports personnel and infrastructure that have made it possible to conduct and facilitate several international sporting events in the past”.

“As planned, national coaches from every competing nation will be in SAMOA for the WORLD NINES. Our local coaches and referees will join each international team in a major coach refereeing and trainers upskilling program during this tournament, which will enhance the level of professionalism in officiating games and in coaching”.

“This event will attract rugby league fans and supporters from around the world to come to SAMOA”.

Paul Broughton sees this event as bringing the world rugby league family into an exciting new stage of international expansion, saying that ‘nothing unites a nation more than a winning rugby league team. A new generation of athletes will be seen through the WORLD NINES – Confederation Cup in SAMOA. Their rugby league potential will only be limited by their level of dedication and willingness to discipline their sporting lives through this opportunity that now presents itself and may not have been obvious to them previously”.

Up to sixteen men’s and women’s teams have been expressed their keen interest in competing in the internationally sanctioned WORLD NINES – Confederation Cup including some new powerhouse nations. All players in the event are non NRL or Super League players, past or present, enabling a showcase of new talent and new nations to rugby league.

Host nation SAMOA will field teams, as will Australia and others, with the final draw to be announced during an official function to be held closer to the event.

Phil Gould AM, who is enjoying his first visit to SAMOA urged the local community and businesses to embrace the tournament which he believes will provide a significant boost to the nations sporting community, while also showcasing SAMOA to the world.

“This WORLD NINES – Confederation Cup tournament, devised by my good friend Paul Broughton, allows emerging nations all over the world to compete on a stage like this.” “It will not only highlight and bring a spotlight to rugby league globally, but it will also bring a spotlight to this beautiful country of Samoa and I really applaud the Honourable Prime Minister and his Cabinet for taking on this venture” said Mr Gould.

“I thank you very much for the invitation. As I said, it won’t be the last time that I come back to SAMOA. I look forward to it. I am going to learn a lot more about the Pacific Island nations. I think it’s the future of our game”.

“I congratulate the Honourable Prime Minister and Paul Broughton for putting forward this venture, and I thank you for the invitation to be here today”. The SAMOA Government has introduced a significant 200% tax incentive for all commercial partners in Samoa of the event, without limitations on the incentive amount.

Each game will be streamed live to the official WORLD NINES website, with daily media releases and video highlights sent out to the world’s rugby league and sports media. 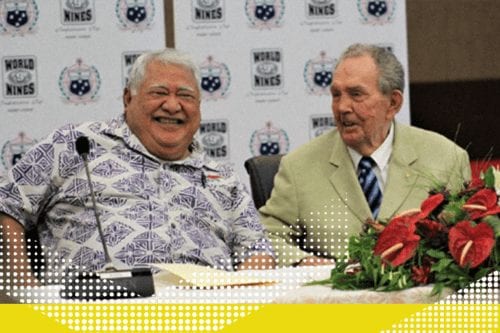 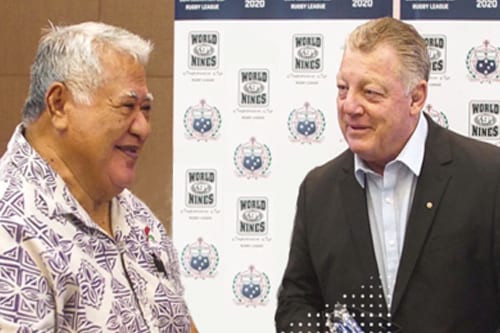